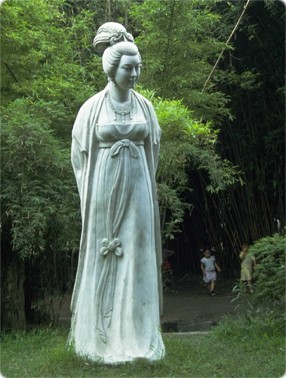 When a classic poem works it transcends time so we can almost be there with the poet and, in a sense, feel their feelings and see what they see.¹

The following selections of Asian and Middle Eastern literature are all English translations, which some may say is a shortcoming. But if a passage speaks to a reader, it’s a moot point whether a translation is legit or not.

One could argue that translated texts, like the Bible for instance, are part of God’s plan and previous language versions are not necessarily of any greater value.

Some scholars and pundits might be too rigid to appreciate this perspective. They could also be unaware of postmodern theories about language, specifically, the ideas of connotation and endless chains of signification. For postmoderns, all texts have open-ended meanings that depend, in large part, on the reader’s interpretation.

In addition, theologians often say that the meaning of a given text is influenced by its numinous potential. And it seems that most words – not just religious ones – within any language carry a kind of numinous potential, however great or small.²

While some old style scholars dogmatically insist on the importance of original languages, we’d do well to remember that language prowess has been used for centuries by unscrupulous elites to oppress and marginalize individuals perceived as a threat to prevailing powers, be these religious, regal or academic.

Not to say that all linguists are arrogant and self-serving! The vast majority are humble, innovative thinkers who use their abilities for the common good. Sincerely delighting in the subtle nuances of world languages, these individuals have a great gift and, obviously, much to offer.³

The authors highlighted below seem to be well aware of the arrogance of petty scholars and, more generally, to the bright and dark hues of human existence. Ancient and medieval people knew all about war, intrigue, betrayal, poverty and broken hearts. But amidst all that, their souls yearned for goodness and beauty. And their works give us profound insights into the nature of time, eternity and ourselves.

In the casket of the Hours
Events deep-hid.
Wait on their guardian Powers
To raise the lid.

And the Maker infinite,
Whose poem is Time,
He need not weave in it
A forced stale rhyme

The Nights pass so,
Voices dumb,
Without sense quick or slow
Of what shall come.

From the Shakuntala Kálidása, circa 5th century CE

It is natural that the first sight of the King’s capital
should affect you in this manner;
my own sensations are very similar.
As one just bathed beholds the man polluted;
As one late purified, the yet impure:-
As one awake looks on the yet unawakened;
Or as the freeman gazes on the thrall,
So I regard this crowd of pleasure-seekers.

[These] meetings in dreams,
How sad they are!
When, waking up startled
One gropes about,-
And there is no contact to the hand.

The Priest Hakutsū from the Manyo Shu, circa 704 CE

O pine-tree standing
At the [side of] the stone house,
When I look at you,
It is like seeing face to face
The men of old time.

I look at my shadow over and over in the lake;
I see no white face, only the white hair,
I have lost my youth, and shall never find it again.
Unless to stir the lake-water!

The jade faces of the girls on Yueh Stream,
Their dusky brows, their red skirts,
Each wearing a pair of golden spiked sandals-
O, their feet are white like frost.

The Girl of Yueh Li Po

She is gathering lotos-seed in the river of Yueh.
While singing, she sees a stranger and turns around;
Then she smiles and hides among the lotos-leaves,
Pretending to be overcome by shyness.

A Song of War Li Po

Before the Peak of Returning Joy the sand was like snow,
Outside the surrendered city the moon was like frost.
I do not know who blew the horns at night,
But all night long the boys looked towards their homes.

A Simple Rustic You Seemed Wu-Chi Liu from the Book of Poetry, 10th to 6th centuries BCE

Three years I was your wife,
I never tired of household chores.
Early I rose and late I went to bed;
Not a morning was I without work.
First you found fault with me,
Then treated me with violence.
My brothers, not knowing this,
Jeered and laughed at me.
Quietly I brooded over it
And myself I pity.

Did you come here?
Or did I go to you?
I cannot recall,
was it a dream or was it real?
Was I awake or was I asleep?

In utter darkness
my heart is clouded
and I am lost.
Was it dream or was it real?
You will have to decide.

I’d like to include one modern selection from a Pakistani poet-philosopher:

In bondage life shrinks to a rivulet;
in freedom, a boundless ocean.

Among countless compendiums of Asian literature, standing out are Han-Shan’s Cold Mountain poems.

Han-Shan was a wanderer during the Tang Dynasty, 627-650 CE. Gary Snyder says “he is a mountain madman in an old Chinese line of ragged hermits.” But Lu Ch’iu-yin sketches a more reasonable picture by saying “No one knows just what sort of man Han-Shan was.”

Living at a place called Cold Mountain, he was known to appear at Kuo-ch’ing temple, where one of the local monks fed him scraps of food, concealed in a bamboo tube. Once, when other monks approached him, Han-Shan apparently stopped, clapped his hands and laughed, leaving behind his signature “Ha Ha” phrase.

Beat writers like Jack Kerouac picked up on Han-Shan’s verse, as did the hippies and seekers of the 1970s. And I sometimes wonder if his ideas might help us to understand some of our 21C homeless people. It’s doubtful that all street people are spiritually achieved and happy. But might some be? And, for that matter, was Han-Shan?

The following selections are from Literature of the Eastern World, ed. Leo B. Kneer. Glenview, Ill.: Scott, Foresman and Co., 1970.

I settled at Cold Mountain long ago,
Already it seems like years and years.
Freely drifting, I prowl the woods and streams
And linger watching things in themselves.
Men don’t get this far into the mountains,
White clouds gather and billow,
Thin grass does for a mattress,
The blue sky makes a good quilt.
Happy with a stone underhead
Let heaven and earth go about their changes.

Once at Cold Mountain, troubles cease-
No more tangled, hung-up mind.
I idly scribble poems on the rock cliff,
Taking whatever comes, like a drifting boat.

When men see Han-Shan
They all say he’s crazy
And not much to look at-
Dressed in rags and hides.
They don’t get what I say
& I don’t talk their language.
All I can say to those I meet:
“Try and make it to Cold Mountain.”

¹ This also happens with short phrases. Whenever I think of veni, vidi, vici I can just imagine Caesar standing at the top of a hill, looking down on the town he’s about to plunder.

² Consider the English word salubrious. One senses its history. It carries not only “horizontal” meaning (its current conceptual connotations) but also “vertical” meaning (a numinous mystique that resonates through the ages, across Europe back to its Latin roots). Many words seem to evoke a kind of spiritual ambiance or, if you prefer, subtle mystique. While this horizontal vs. vertical distinction is arbitrary, it suggests that words in any language hold not just conceptual plurality but also numinous potential. Jungians talk about the numinous, transcendent power of standard symbols like the mandala. But it’s quite possible that all language signifiers carry subtler, more specialized numinous potentials.

³ An interesting and informative scholar of languages whom I recently stumbled upon is Nicholas Ostler.

One thought on “Asian and Middle Eastern Literature – Selections and Reflections”