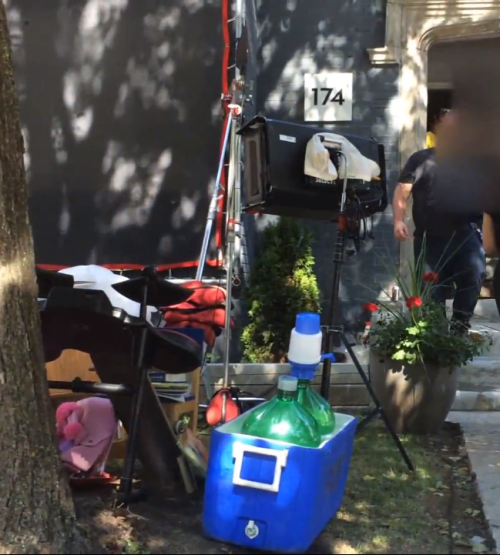 Back in the day, I had a European professor who seemed to think we are devoid of culture this side of the Atlantic.

Take, for instance, this 13-second clip of a TV crew setting up a few blocks away from where I live. We get a lot of this in Toronto. American productions are pretty common up here because of tax credits, the favorable exchange rate, and the great similarity between the US and Canadian landscapes.

I asked a member of the crew how long the scene would be.

“A minute or two,” he replied.

Amazed by the degree of preparation for just a short scene, I chatted with him a while longer before he was called back to work.

The segment will be in a CBC TV show called Workin’ Moms. I admit I’ve never seen it. But the scenario gave me a whole new appreciation for the cool and coordinated crew.

And this was just a short TV stint. Can you imagine how long and involved the planning and execution of a Hollywood blockbuster must be?

To me, it’s not unlike the making the Egyptian pyramids. Seriously. I really believe the art of moving pictures is amazing. And I’ve always disagreed with snobs who think it’s somehow inferior to literature, painting, sculpture, music or architecture.

As for the professor, well, he can live in his smug arrogance, enjoying the economic benefits of our free society while, at the same time, oddly feeling superior.

Excerpted and revised from MichaelWClark.com