Pope Francis vowed Friday that the Catholic Church will “never again” cover up clergy sex abuse and demanded that priests who have raped and molested children turn themselves in. Francis dedicated his annual Christmas speech to the Vatican bureaucracy to abuse, evidence that a year of devastating revelations of sexual misconduct and cover-up has shaken his papacy and caused a crisis of confidence in the Catholic hierarchy. Francis acknowledged that the church in the past had failed to treat the problem seriously, blaming leaders who out of inexperience or short-sightedness acted “irresponsibly” by refusing to believe victims. But he vowed that going forward the church would “never again” cover up or dismiss cases. “Let it be clear that before these abominations the church will spare no effort to do all that is necessary to bring to justice whosoever has committed such crimes,” he said. Francis urged victims to come forward, thanked the media for giving them a voice and issued a stark 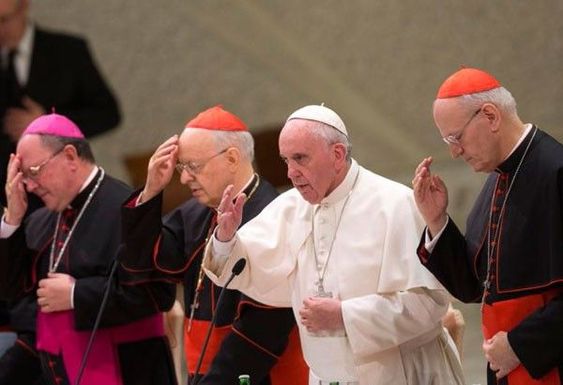 Comment: At first I thought this pledge was a bit confused and mixed up. From just the headline it sounds like sex abuses will continue but the Pope promises not to cover them up. Not very encouraging. I think a stronger statement would have been SEX ABUSE WILL NEVER HAPPEN AGAIN IN RCC.

But then I read the article and it seems he is calling for pedophile priests to turn themselves in, just like he implored underworld leaders and corrupt politicians to confess and turn to the light, some time ago.

Good luck, is all I can say. He’s a good Pope and someone must speak out against our worldliness. But the RCC structure is so thoroughly invested in money, tradition, materialism and repressed/suppressed/oppressed homosexuality, itself, that the whole thing seems a bit hollow and unhealthy to me.

Major changes are needed in RCC. I still go to Mass because the Holy Spirit is a different matter than current church politics. A lot of Catholics fuse the two in their minds maybe because it’s too hard for them to actually think for themselves.

I don’t confuse spirituality with politics. I have studied enough to know that RCC has changed over the centuries and I believe it will continue to do so.

If that gives me “strange ideas” from a conventional 21st-century perspective well, so be it. Back in biblical times, many of the common folk who invested in money and superficial materialism didn’t like Jesus much. Today, things have almost come full circle. The hypocrisy Jesus railed about has now become front and center in RCC.

But again, the Holy Spirit remains unchanged and ever-present.