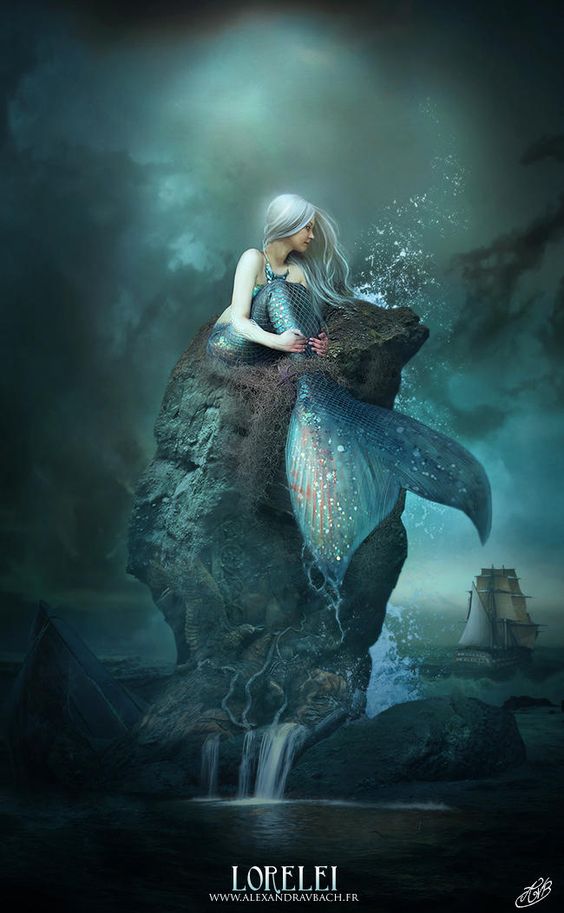 In mythology, Lorelei is a Germanic enchantress or mermaid whose melodious song draws sailors over reefs to their doom.

Lorelei began as a literary figure created by Klemens Brentano at the turn of the 19th century.

is falsely accused of maliciously bewitching men and driving them to ruin; later pardoned and on the way to a nunnery she passes and climbs the Lorelei rock, watching out for the lover who abandoned her, and falls to her death; the rock still retained an echo of her name afterwards. Brentano had taken inspiration from Ovid and the Echo myth.¹

She soon became the object of poetry and legend throughout England, contributing to myths surrounding a tall, echoing rock in the Rhine river—the Lorelei Rock.

The Lorelei story has also been recounted in song, from composers as diverse as the virtuoso Franz Liszt to the pop stars Styx and the atmospheric Scottish band the Cocteau Twins.

The influential poet Sylvia Plath also wrote a poem in her honor.

It is no night to drown in:
A full moon, river lapsing
Black beneath bland mirror-sheen,

The blue water-mists dropping
Scrim after scrim like fishnets
Though fishermen are sleeping,

The massive castle turrets
Doubling themselves in a glass
All stillness. Yet these shapes float

Up toward me, troubling the face
Of quiet. From the nadir
They rise, their limbs ponderous

With richness, hair heavier
Than sculpted marble. They sing
Of a world more full and clear

Than can be. Sisters, your song
Bears a burden too weighty
For the whorled ear’s listening

Here, in a well-steered country,
Under a balanced ruler.
Deranging by harmony

Beyond the mundane order,
Your voices lay siege. You lodge
On the pitched reefs of nightmare,

Promising sure harbourage;
By day, descant from borders
Of hebetude, from the ledge

Also of high windows. Worse
Even than your maddening
Song, your silence. At the source

Of your ice-hearted calling—
Drunkenness of the great depths.
O river, I see drifting

Deep in your flux of silver
Those great goddesses of peace.
Stone, stone, ferry me down there.²

I once met an attractive young woman in college called Lorelei. While talking about her name I asked, “Oh, that has something to do with mythology?” being youthful and not having had the time nor resources in the pre-internet age to learn the vastness of world myth.

She replied by telling me about the myth encompassing Lorelei in mock tones of perilousness. We were awkwardly alone in her dorm room and I think perhaps she was trying to tell me something. I left soon after, our acquaintance never becoming more than that. 🙂