Cold War spies wrote a guide on how to target Labour MPs to get them to pass information to communist Czechoslovakia, the Telegraph can reveal. 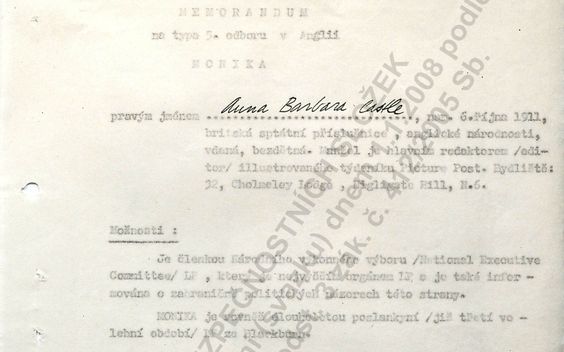 I’ve encountered a few Czechs along the way. The individuals I  met seemed like incredibly clever people, with a kind of mysterious interior perspective not too well-known or understood among the general Canadian populace, who generally appear more… hmm. How should I say?

Not necessarily superficial but definitely on the surface.

I’m not exactly sure why the Czechs I met seemed so multilayered and private; it might have something to do with their history and geolocation.

Czechoslovakia was the only democracy in Central Europe during the interwar period.[23] However, parts of the country were occupied by Germany in World War II, while the Slovak region became a German puppet state. Czechoslovakia was liberated in 1945 by the Soviet Union and the United States. Most of the German-speaking minority were expelled following the war. The Communist Party of Czechoslovakia won the 1946 elections and after the 1948 coup d’état established a one-party communist state under Soviet influence. Increasing dissatisfaction with the regime culminated in 1968 to the reform movement known as the Prague Spring, which ended in a Soviet-led invasion. Czechoslovakia remained occupied until the 1989 Velvet Revolution, which peacefully ended communist rule.¹

In recent times, Czech elites and bureaucrats have acted as puppets for both Nazi Germany and the communist U. S. S. R.—two powers openly hostile to Western democracy and freedom. Sometimes the Czechs faltered under pressure but in 1946 the people actually elected a communist government. A piece of history often glossed over by PC writers and historians.

Following the [1946] elections, Communist leader Klement Gottwald formed a coalition government. However, the Communists gradually tightened their grip on the country. After the non-Communist members resigned from the Cabinet on 25 February 1948, the Communists seized full control of the country.²

Now it’s true the Republic was liberated in 1989 but I wonder how such a checkered history might have affected some of the general population who lived through the occupations and communism.

One lovely Czech woman I met in an art gallery told me it was “a total shock” getting off the plane in Canada after a grueling cross-examination in the old country.

“We had just passed through a checkpoint with guards toting heavy machine guns, asking penetrating questions. When we arrived in Canada the airport officials joked about what great hockey players we had!”

Czech hockey players aren’t so great these days but hopefully the cold, oppressive climate has warmed a bit since I met this lady in the 90s.