Karma Transfer is the idea, found especially in Hinduism, that the experiential effects of good and bad karma can transfer from one living being to another. 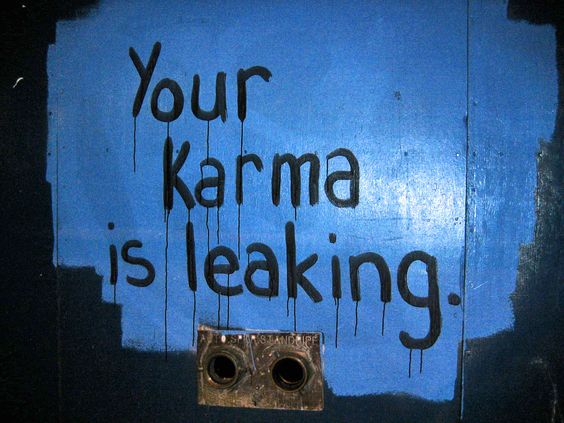 In her study of Hindu mythology, the scholar Wendy Doniger O’Flaherty illustrates the belief that karma isn’t just about personal histories but can actually move and shift among many beings, human and non-human.

Another being’s bad karma can be tossed around like a proverbial hot potato and is something to be avoided at all costs.

However, there is a plus side to the notion of karma transfer. And this where the idea of purification and grace comes in. To borrow from Christian theology, a kind of ‘intercession’ occurs between one being and another, usually to help lessen the burdens of bad karma which the less pure soul struggles with.

Again, good and bad karma is not only transferred among human beings. Karma also transfers among the gods themselves because the Hindu gods – not unlike their Greek counterparts – often behave in ways morally unacceptable even for human beings.¹

The transmission of karma among living beings is complicated. Karma not only transfers among people and among the gods. Karma also transfers between gods and human beings.²

One of my favorite tales illustrating the complexities of karma transfer in particular and of Hindu cosmology, in general, is found in the story of Siva and the Pine Forest Sages.

Some people see karma as a firm, unalterable law but this view is woefully incomplete. As mentioned above, the effects of bad karma may be lessened through personal devotion and God’s grace.

Many also believe that spiritually advanced yogis and saints receive the lion’s share of their disciples’ bad karma through the spiritually subtle experience of karma transfer. This dynamic apparently clears the path to salvation for those who otherwise would be ensnared in related states of ignorance, delusion, and evil.

In keeping with this belief, the Hindu holy man Sri Ramakrishna apparently

had a vision of his subtle body…[with] a number of sores on the back.  He was puzzled by the sight, but it was made clear…profane people had caused the sores on his body. They themselves had been purified, but they had left the suffering arising from their own sins with him.³

If not an example of flawed “magical thinking” as some psychiatrists no doubt would put it, this potentially real dynamic does not necessarily mean the guru or saint is spiritually perfect. Indian texts talk about “lesser gurus” whom one can apparently still learn from.

As for those cultish types and cult leaders who claim to be perfect, they are most likely suffering from what Carl Jung and Joseph Campbell termed inflation, a charge that many non-Christians level against Christ as depicted in The New Testament.

Psychological inflation might not be too dangerous if deluded individuals only inflicted their madness on themselves. I mean, one could parade around and look in the mirror believing he or she is the reincarnation of Napoleon or Cleopatra and that might not be inordinately harmful. Many delusional people hide their delusions and manage to live a kind of double life, convincingly pulling off a normal act in public.

Sadly, however, some borderline and insane people actively manipulate and abuse gullible others. And this harmful dynamic doesn’t only occur in religious cults. It appears in other places where a psychologically injured person with unusually high intuition suddenly thinks they are a god, a ‘golden boy’ or a ‘chosen one’ much to the detriment of those around them.4

A dynamic similar to karma transfer is found in Catholic mysticism. Here the saint cooperates with God’s plan of salvation by interceding for others still mired in sin. Essentially, the saints ‘take the sin’ of those still on the road to sainthood—which from a Catholic perspective, is each and every one of us.

¹ Even a cursory study of Hindu (not to mention Greek and Jewish) myth reveals that these deities are anything but non-violent, moral exemplars like Jesus Christ or Mahatma Gandhi. Quite often they behave like immature, volatile tyrants.

4 Charles Manson is one horrific example but we also have similar stories where an older cougar or snake uses her or his uncanny charisma to hoodwink young, gullible individuals into believing the older person is the coolest thing since ice cubes. And before the poor dears realize it, they are knee-deep in trouble, so much so that family and/or social services are usually required to break the charismatic spell that the old snake or cougar has cast upon them.

3 thoughts on “Karma Transfer – A spiritual dynamic not well understood by textbook psychiatry?”