President Donald Trump is in India for three days. A local Ahmedabad official said the wall was “part of a beautification and cleanliness drive.” 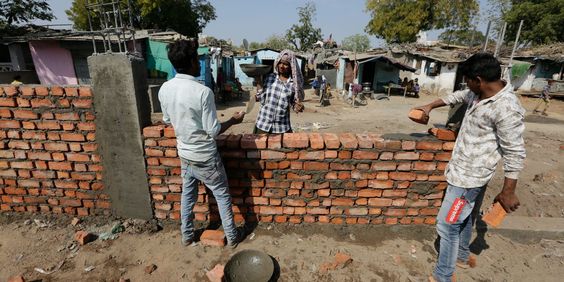 The Hindu holy man Swami Vivekananda once asked how India can be “the guru of the world” if its inhabitants all have emaciated bodies. Vivekananda was a disciple of another guru, the revered Sri Ramakrishna. Both are big shots in the Indian spiritual landscape.

I think Vivekananda was touching on something that some enthusiasts miss. The country is both beautiful and horrid. Beautiful in that the poor, many of the poor, really are full of light and bright smiles. But Gaaad. The material conditions in which so many live?

This above-linked story about Trump getting another kind of wall reminds me of my stay at Santiniketan, W. Bengal in the 1980s. The then PM Rajiv Gandhi was coming to town and guess what the local officials did?

They came in jeeps and knocked down all the market stalls lining the main street. Villagers had been making their honest living there day to day. But that didn’t matter. To the local authorities, it didn’t “look good” for the big PM. So out with the billy clubs and down with the market stalls.

It was a travesty.

They didn’t just dismantle the stalls. The stalls completely disappeared.

So Mr. Gandhi had a nice phony view of this scenic village called Santiniketan (English = “abode of peace“).

And Mr. Modi did much the same thing for Trump.

How appropriate for politicians. A view of the fake and make-believe. Maybe Mr. Trudeau should go. (Oh, I forgot. He already botched one India trip.)

Money usually cares about ephemeral outward appearances while largely ignoring the inside, which is what carries on to eternity.

Blind Pharisee! First clean the inside of the cup and dish, and then the outside also will be clean.