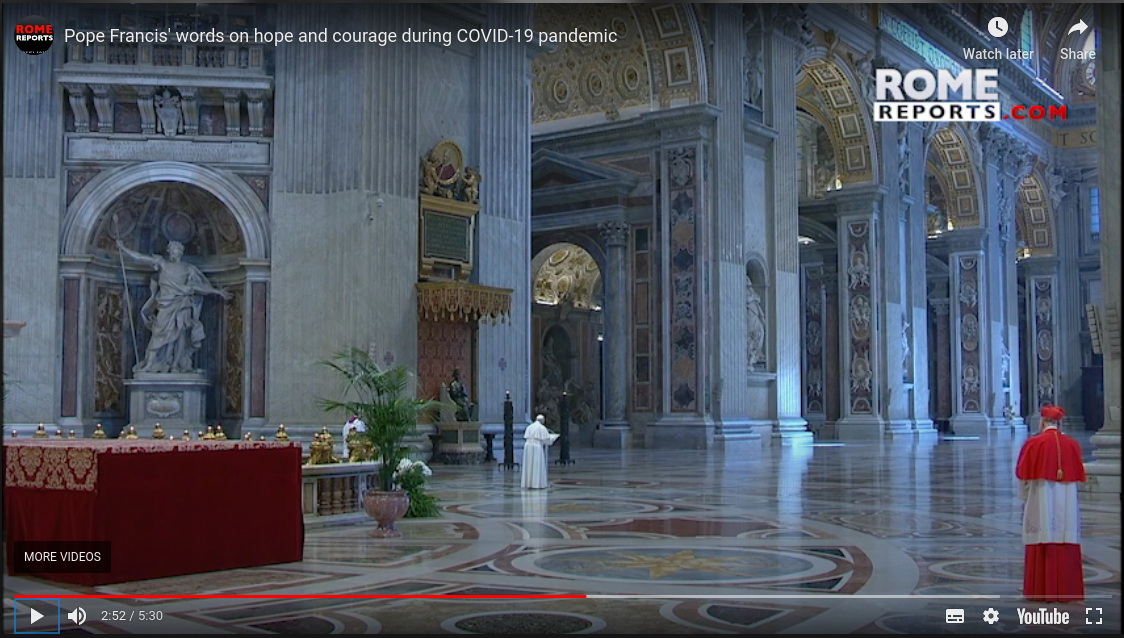 Last night my leg muscles were feeling like jelly from underuse, so I went outside and walked up and down the driveway in the privacy of the falling dark. The city is unusually quiet because of the coronavirus. Stepping outside almost feels like a camping trip after being indoors for so many hours.

Instead of hearing the oppressive drone of Highway 401 (the busiest highway in North America) we now hear animals, wind and silence. Well almost. We can still hear a slight hum from the overall traffic but it’s nothing like it used to be.

In this silent splendor, a thought came to me. It was a happy thought.

I don’t have to go to Church any longer to feel good! I’ll be free to do whatever I want and not have to rely on that organization to feel right and confident!

In short, I have been weaned off Church simply because it is now impossible to go to Mass.

By way of analogy, Star Trek Voyager fans might remember how delighted the holographic doctor felt when he first got his mobile emitter.

Then I mused that the pandemic has thrown many of us into a new ontological situation. For some, this will just be a frustrating time. For others, it will be challenging but also recognized as a transition.

When I left all the comforts, culture, and dystopian realities of the West to study in India, I was thrown into a whole new set of joys and contradictions. The change was dramatic. This was before the internet and we only had snail-mail and the odd telegram to connect with home. The phone was remotely possible but difficult, crackly and expensive.

One of my fellow students in the university village where I lived put it this way:

It’s like being on a monastic retreat and not realizing it.

He was so right. And I wonder how many of us are going through similar changes right now.

My second period of major transition came a few years later while studying in Ottawa.

I couldn’t return to my old ways. Just too much water under the bridge.

This second transformation was like nothing I had encountered. And I’ll leave it there because frankly, I don’t think too many people would get it even if I tried to explain.

We all go through our own changes. We’re all unique.

There does seem, however, to be two main types of psychological development. Correct me if I’m wrong or if you disagree, but I would venture to say that the first type involves what I call ‘horizontal development’ (HD). The second type I call ‘vertical development’ (VD).

HD means we learn our trade or profession and go on to enjoy all the fruits it will bring. Our circle of friends and commitments may change. We may buy new things… color TV, stereo, computer, car, house, trips to Iceland.

But we haven’t dramatically changed. We’ve just gotten older, ‘wider,’ and more connected in the horizontal plane of conventional society. In short, we become fatcats if not physically, then at least materially and socially. Developmental sociologists call this secondary socialization.

VD, on the other hand, entails letting go of many of the worldly things we used to treasure. Our pleasure is more about new spiritual experiences and insights instead of buying the latest smart phone or, for that matter, being a slave to the latest trends, like Zoom for instance.

Vertical developers (VDs) significantly change, perhaps think more for themselves and many folks around them cannot really get it.

Horizontal developers (HDs) are still rooted in their particular slice of the conventional world of ‘society.’ And whenever VDs dare talk about their experiences, they run the risk of being the object of the HDs worldly reductionism.

Jesus did warn us about this in the Sermon on the Mount.

Do not cast your pearls before swine (Matthew 7:6).

Accordingly, most VDs wisely and prudently try to hint at their situation instead of outright saying it.

The depth psychologist Carl Jung likewise said he was always hinting at things most of his peers could not understand.

But Jung tried. And so do most VDs (unless they’ve got something terrible to hide, but that’s another story).

We’re All In This Together

In reality, most of us are a combination of these two ideal types, as the sociologist Max Weber once put it.

We’re a bit materialistic and spiritual. Some of us may fall further toward the HD end of the spectrum, while others lean toward the VD side of things.

The key, I think, is to not allow ourselves to become high and mighty regardless of which orientation we gravitate toward. All too often arrogant materialists say or imply that they are ‘winners’ and ‘successful’ when those with fewer goodies are ‘losers,’ ‘failures’ and ‘busted flushes.’

In response, flaky spiritualists often state or indicate that they are ‘sublime’ or ‘achieved’ in their alleged simplicity while painting materialists as heavy, dull-witted dopes.

Each group habitually thinks they are better than the other. It’s an easy trap to fall into.

But that’s not right. And this is where some worldly and spiritual pathways fall short. Enthusiasts and adherents in both camps forget the central feature of true greatness—namely humility and a willingness to serve God, wherever that leads.

So how do we measure up with this new scale of value?