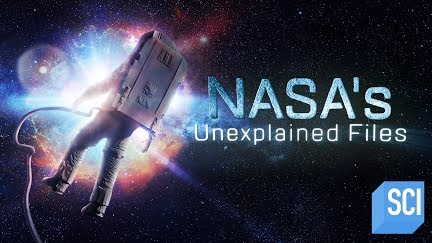 I was watching a TV show called NASA’s Unexplained Files last night. The show brought up some apparent anomalies that upon closer inspection turned out to be ordinary occurrences.

One of the best ‘anomalies’ that was debunked was a photo of an apparent pyramid on the moon.

True, a pyramid shape could be discerned in one of the lunar rover pics. But upon closer inspection, a very ordinary explanation came out. It was just a bad photo of part of the rover itself—a rectangular unit attached to the rover that when photographed at an angle and with insufficient light looked a bit like a pyramid.

Good enough explanation for me.

Another file that was debunked had to do with a Norwegian skydiver who believed he saw a meteoroid fly past him while in freefall—no, actually, just after his parachute opened. That’s when the ‘space rock’ went shooting past him. Apparently, this video went viral on the web.

After a lengthy investigation, a NASA space physicist determined that no, it was not a meteoroid but a piece of gravel that must have been packed in his chute or fallen off the plane when he jumped. So when his chute opened, he slowed down and his relative speed to the rock changed—in other words, the rock sped past him because he decelerated.

I wasn’t fully convinced on this second one. Just because the physicist said “complicated algorithms’ proved it was not a meteoroid was not quite enough. I’d have to see and understand those numbers before being fully satisfied.

But the whole thing got me thinking.

For many years I have argued that highly intuitive – let’s say psychic – spies are a reality around the world. And I realize I am mostly met with skepticism.

That’s okay, especially since a lot of the literature on the topic really is pretty goofy.

I personally believe that much of the stuff we see on the web about this is either put out by charlatans trying to make a buck or by well-intentioned folks who nevertheless do not possess finely honed intuitions and thus project their own ideas onto the subject matter.

It can be frustrating because for many years I have been ‘seeing’ a really nasty yet talented player doing their thing in Canada. And not only that. Spreading their influence into the USA.

But again, nobody will believe me. And I’ve come to almost accept that. In fact, I almost didn’t write this today because I am just so sick and tired of talking to morons.

Sometimes I even think, Well, if the USA and Canada are that thick and stupid, maybe they deserve to be subtly occupied by hostile psi-spies. It is not as if I have not tried to warn people. I most certainly have.

The thing is, these hostiles are creepy. Not ‘nice’ intuitives. Creepy like the kind of spy who would immigrate and marry a young gullible citizen in the target country simply to beef up their cover.

Finks. Scoundrels… yet clever as hell.

So I have to keep trying to sound the alarm.

Over the years I have come to believe that psi-spies will do everything in their power to try to marginalize anyone who catches on to them. They will say or imply that the whistleblower is crazy. It’s an old tactic that goes back to the Soviet era, where the Russians locked up anyone they didn’t like — and not only in jails but in insane asylums.

But don’t listen to me. You probably won’t anyhow.

Enjoy your ‘woke’ freedom while it lasts. Because if you do not really wake up – in another way, I mean – your lovely democracy could be thoroughly infested by hostiles and for all intents and purposes, destroyed.

Dr. Seuss was no fool and his success no mistake. Dr. Seuss simplified complex realities so even kids could understand it. If his tales were mere fantasy with no connection to reality, they would not have resonated.

I sincerely hope that on some level the people of the free world will sense the urgency in what I am suggesting and at least consider that it might be so.

One thought on “Are the US and Canada asleep at the wheel?”