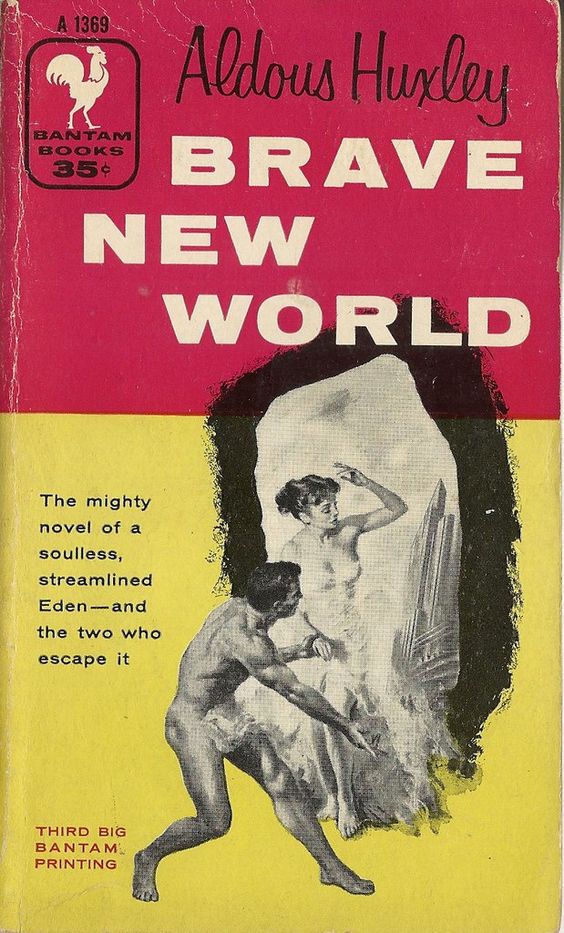 Along with George Orwell’s Nineteen Eighty-Four (1949), Aldous Huxley’s Brave New World (1932) is probably one of the best known ‘classic’ dystopian sci-fi novels of all time.

In today’s Double Take,* John the Savage (raised outside of the ‘utopian’ New London in the ‘Savage Lands’) consoles Lenina (who was raised in New London) when she realizes what a sham her ‘perfect’ society really is.

It suddenly dawns on Lenina that citizens are controlled by their removable eyepieces (which they almost never remove) and by mood-stabilizing pills called Soma.†

The eyepiece connects all citizens to Indra,† a regulating supercomputer that thrives off and ‘grows’ from its direct human inputs. And the pills chill folks out whenever they feel the slightest emotional discomfort.

In this Brave New World, stability and manufactured ‘happiness’ are gained at the cost of personal freedom and genuine individuality.

Lenina – I’ve never been alone… we’re never alone here… everyone’s connected… even when we sleep.
John – You should try taking that thing out of your eye more often.
Lenina – (laughs nervously) Some things you just don’t do. You know it’s… selfish… antisocial… Indra would know… (looks at the open landscape and screams) WHAAAAA… WHY HAVE I NEVER BEEN HERE !?!
John – Whoa! Hey. Take it easy.
Lenina – It’s all just sitting here… and we never even looked… WHY?
John – I… I don’t know. You’re… you’re okay.
Lenina – I could have done things! I could have gone places! And I’ve been…
John – You’re… Hey… You’re here now.

This scene speaks to us on many levels.

The sociologist Peter Berger once wrote in his Invitation to Sociology (1963) that sociology is about “standing outside” society and seeing from a different perspective. Sociologists, Berger says, are like historians of the present. Instead of naively accepting conventional assumptions about “right and wrong” and “true and false,” sociologists ask questions.

This is a quaint idea that I almost believed in back in the day, but the reality of sociology itself is not quite that simple.  Most sociologists exist and get paid within an academic system or perhaps in “think tanks” that limit their rights and freedoms of expression. Universities and partisan-funded research centers were never unbiased and probably never will be. Politics and economics are huge players in these contemporary factories of thought.

So we need a reflexive look—a sociology of sociology.

In addition to exploring its diverse cultural implications, Brave New World could also be taken on psychological and spiritual levels. And that shouldn’t surprise us because human beings are biological, psychological, social, and spiritual creatures.

So from this * we can ask a valid question: Do supposedly free and democratic societies unwittingly hold some unique and gifted individuals back from reaching their full human potential?

I’d say in some cases the answer is yes.

* Unfortunately, YouTube’s AI blocked my one minute clip before I could move it from private to public. Sorta ironic. “Indra” only lets some people use the material for educational purposes…