This post was last edited in 2011, making it nine years old. A lot has changed since then. Not so much in the world, for pandemics have come and gone throughout history.

The Bible’s Old Testament talks about hideous plagues God sends to the Egyptians for not allowing his chosen people – the Israelites – to go free. And I’m sure some Christians believe that COVID-19 is God’s way of chastising us for being overly superficial and materialistic.

I personally think it is unwise to make broad proclamations about what God wants, or concerning God’s thoughts on specific issues.

So here I am, faced with a somewhat terse, slightly stale entry about Jesus Christ in desperate need of a freshness check.

Considering Christ is the most important figure in my life. You would think I’d be eager to update and write countless words about how I feel.

But honestly, I don’t really care to say too much.

Words and clever arguments will not reveal the light of Christ to non-believers. It’s a special kind of something… hard to describe. But recently I was thinking that one way to perhaps differentiate non-believers from believers is to outline two different ideal types, in the manner of sociologist Max Weber:

This second group might use words like “grace” or “The Holy Spirit” to try to convey their orientation and encounters.

However, this distinction is problematic. I myself once experienced a strong and beautiful feeling of grace while a passenger in a motorboat. I wasn’t holed up in a church praying. Although I had been holed up on an island that, although naturally beautiful, wasn’t a very pleasant stay at the time. The feeling of grace actually came when I was leaving, like I had endured an ordeal and was duly rewarded.

To complicate matters, many people talk and write about so-called astral realms. These seekers tend to equate these allegedly ‘higher’ planes or ‘vibrations’ with a Christian experience of heaven.

I believe this is a mistake, although an honest mistake made out of ignorance and lack of interior experience.

To me, these folks just don’t know any better. And I always hope that someday they will come to experience the dramatic difference that I increasingly became aware of in my own quest.

My awareness of the difference was sealed one day when called to kneel before a cross. I won’t go into the dramatic details. It’s too personal and difficult to describe for a general, public post.

So now I turn to this older Think Free entry about Christ, written back in 2011. Except for a few minor tweaks, I will mostly leave it as it is.

As I say, it’s almost a waste of time to play the role of priest or Bible scholar. Yes, I know a few things. But Wikipedia or the online Catholic Encyclopedia can provide far more than I am willing and able to do. 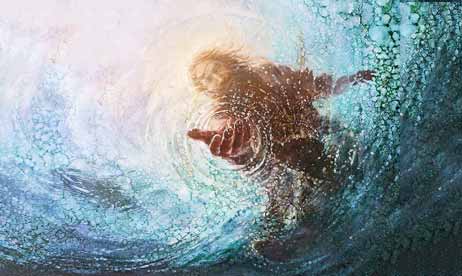 The English word Christ is derived from the Greek term, Khristós, meaning anointed or the anointed one.

Most Christians believe that Jesus, “the anointed one” is the only Son of the Old Testament Lord, Yahweh.

According to the New Testament account, through God’s intervention, Jesus was miraculously born from the Virgin Mary, and raised by Mary and his foster father Joseph. After teaching and preaching the “Good News” of God’s Kingdom, Christ fulfills Old Testament prophecy by dying on a cross in order to redeem mankind from the original sin of Adam and Eve.

The following OT passages are said to prophesize the coming of Jesus: Psalm 132:17, 2 Samuel 7:12-16, Daniel 7:13-14. The Old Testament books of Isaiah, Hosea and Jeremiah are also regarded as blueprints for later New Testament ideas.

Most Christians, Catholic, Protestant, and Orthodox, agree that Christ belongs within the Holy Trinity of The Father, The Son, and the Holy Spirit.

Some thinkers see this Trinitarian aspect of Christianity as a weak or invalid type of monotheism.

Gnostic Christians, on the other hand, generally see Christ as a manifestation of the Good Light of God, something everyone can attain within oneself, despite living in an essentially evil world.

Some modern Hindus, those who see themselves as liberal or progressive, might perhaps see Christ as an avatar—one among many incarnations of God. Whereas traditional Hindus tend to see Christ more as an, at best, partially liberated messenger. Traditional Hinduism clearly outlines past and future avatars, and Christ isn’t on that list.

Muslims say Christ is a prophet but not the Son of God.

Contemporary Jews often see Jesus as a good, peaceful man but not the Messiah, whom they’re still waiting for. Both Jews and Muslims take exception to the idea that a man could be equal to God.

Generally speaking, non-Christian religions tend to directly (or subtly) repudiate the claim that Christ is the unique Savior of Mankind. While it is often regarded as not okay to criticize non-Christian religions, Christianity is quite accustomed to receiving the harshest, most severe criticisms from all corners. And the historical fact of the crusades, inquisitions, the sexual abuse of minors, the Catholic Church’s sheltering of pedophiles, and allegations of Vatican money laundering doesn’t help matters much.

The problem is, a lot of people confuse the sins of the institutions with the glory of heaven. And frankly, when individuals go on and on with a direct assault against Christianity, I sometimes wonder how much of their outrage is justified and how much stems from the glowing embers of their own unresolved issues.

Some strident atheists will dig up lots of dirt, for sure. But they offer no everlasting solution, which really is no solution at all.

The New Testament Christ, assuming this account actually reflects Christ’s position, does not come to overturn but to fulfill the Ten Commandments. Just what that means can be confusing and may even seem like a clever theological word game. A patch-up job between two incompatible perspectives: “Turn the other cheek” vs. “an eye for an eye.”

But according to the New Testament, the two most important commandments upon which all others depend, are:

And I certainly cannot find anything wrong with that.†

That’s about all I want to say here. I am neither a priest nor a professor. Just a guy who once considered vocations in each area. Ironically, I do not feel I could have reached my full potential in either of those camps.