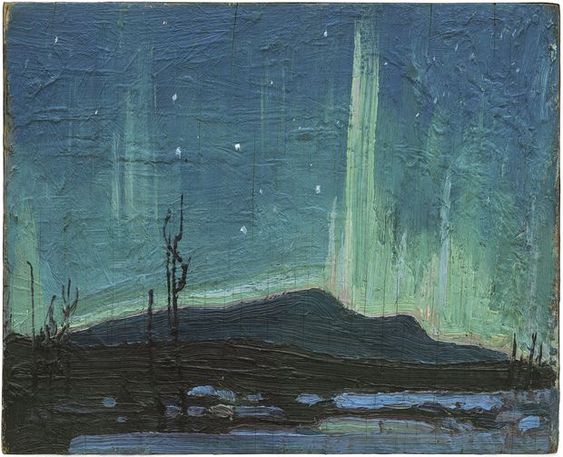 This is a nice painting by Tom Thomson, who in Canada is well known as a member of the so-called Group of Seven landscape artists. We actually have a few oils painted by Percy Robinson, a relation of mine, who was sort of a ‘substitute artist’ for and technically wasn’t a member the Group of Seven but whom we proudly state, was a “friend of the Group of Seven.” Almost as good as owning a Tom Thomson or a Lawren Harris. (Actually, I really like our oils by Percy and will probably photograph and post them someday.)

But to return to Tom Thomson, this painting chosen by the Globe and Mail is pretty indicative of how many Canadians view Christmas. The Globe used to be a more conservative, business-oriented paper. One guy I worked with at the City of Toronto called it “an old man’s paper” (pops looking over the stock market, etc.). But over the years The Globe, along with much of Canada, has globally warmed into a far more Trudeau-loving offering. Meaning… anything goes, rack up debt, and tax everyone into oblivion while the Cdn dollar and standard of living sink to all new lows…

I’m neither a conservative or a liberal and, as I say, it’s a lovely painting but the Northern Lights are a purely natural phenomenon caused by charged particles emitted by the sun as they hit the upper atmosphere.

Auroras are the result of disturbances in the magnetosphere caused by solar wind. These disturbances are sometimes strong enough to alter the trajectories of charged particles in both solar wind and magnetospheric plasma. These particles, mainly electrons and protons, precipitate into the upper atmosphere (thermosphere/exosphere).

The resulting ionization and excitation of atmospheric constituents emit light of varying color and complexity. The form of the aurora, occurring within bands around both polar regions, is also dependent on the amount of acceleration imparted to the precipitating particles.

Not that God isn’t behind natural beauty. Of course, S/He is. But Christmas is about the birth of Jesus Christ, his parents Mary and Joseph, and the Holy Spirit.

If you read further in the above-linked article there’s mention of indigenous beliefs about spirits of the dead associated with the Northern Lights.

But so-callled ‘tramp souls’ (souls that linger on the earthbound plane) and ancestral spirits are not the Holy Spirit. It’s just a completely different story.

But alas, with Canadian secularism and the obligatory nod to everything spiritual but Christian spirituality, The Globe article does not choose a uniquely Christian-themed artwork for Christmas.

Oh well, at least they used the word “Christmas.” In years to come, I wouldn’t be surprised if they begin to use that fart in the face phrase, “Holiday Season” instead of CHRISTMAS.

From a believing Christian.