State prosecutors in Russia asked a judge on Monday to jail Kremlin critic Alexei Navalny for 30 days, after he was detained the previous evening at a Moscow airport when flying home for the first time since he was poisoned last summer. 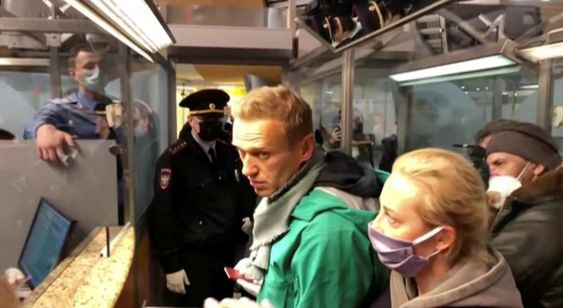 Navalny and his beautiful wife decided to return to Russia. Gosh, if it were me I don’t know what I would do. After all the guy was poisoned and threatened that he would be arrested upon arrival.

Why go at all?

I suppose he wants to make a point. He says Russia is his country and he’s done nothing wrong. So why shouldn’t he go?

For me, the story highlights just how bad things can become in a world ruled by a dictator. And more to the point, when we have Russian spies and criminals trying to infiltrate the Canadian system, I have a real and genuine concern that someday Canada could become like this.

Most Canadians still live in a cloud of overconfidence, arguably like the French before Hitler’s Nazis invaded Paris. There was a ceasefire between the French and German armies for the longest time, and some French thought, hey, maybe it won’t happen. Maybe we’ll be okay.

But later, when the Germans advanced through an opening in Belgium and airborne Nazi pilots were cruelly shooting at ordinary refugees – to include kids, mothers with babies, grandparents – along the highway, the French realized that hell had arrived.

The point we can learn from history is to not be stupid and turn a blind eye to what’s right in front of us. I see no reason why Canada could not become an utter hellhole like Russia. The criminalized Russian and post-Soviet elements are doing their best to make it that way right now.

I urge readers to follow the link and watch Navalny speak in the video. And ask yourself: What can I do to prevent my country from becoming like this?