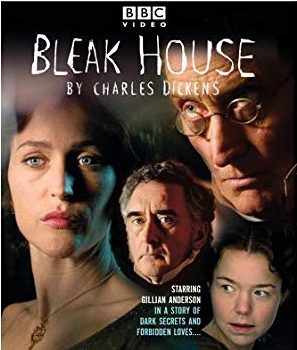 Bleak House is a novel by English author Charles Dickens, first published as a serial between March 1852 and September 1853. The novel has many characters and several sub-plots, and the story is told partly by the novel’s heroine, Esther Summerson, and partly by an omniscient narrator. At the centre of Bleak House is a long-running legal case, Jarndyce and Jarndyce, which came about because someone wrote several conflicting wills. Dickens uses this case to satirise the English judicial system. Though the legal profession criticised Dickens’ satire as exaggerated, this novel helped support a judicial reform movement, which culminated in the enactment of legal reform in the 1870s. There is some debate among scholars as to when Bleak House is set. The English legal historian Sir William Holdsworth sets the action in 1827; however, reference to preparation for the building of a railway in Chapter LV suggests the 1830s.

A review of sorts:

Anyone who knows me knows that I don’t like detailing plotlines in my reviews. Sometimes as a kid I noticed so many other things that I momentarily lost the thread of a plot. But with Bleak House, that would be pretty difficult because it marches along at a good pace and although the BBC video omits parts of Charles Dickens’ novel, it sticks pretty close to it as well.

I enjoyed this series thoroughly. The more I watched it, the more I was pulled in. And several stellar performances make it a real gem for pandemic times. Dickens’ mix of humor and insight seems to work very well in these difficult days. Although the story comes off a touch chauvinistic at times, we have to remember that Dickens lived in a chauvinistic era. Historically speaking, maids were often overworked and some were abused. A relative few were so oppressed that they actually murdered their masters.

But that wasn’t too often.

None of this unwelcome strife occurs with John Jarndyce, the kindly patriarch who comes off almost too good to be true. His only ‘fault’ is to fall for a woman much younger than himself, a thought-provoking development that makes us think about age difference and relationships.

Looking back at my university days I recall two professors who had relationships with their students.

One, so I heard through the grapevine, apparently said that he “f***ed her mind” when speaking on his young woman student. Another actually married his young woman student. Regarding the latter, I can still hear a fellow student telling me this true story in a scornful tone. While I too came to dislike this particular professor, I never publically criticized him for marrying his young student. I figured love is love and as long as everyone knows exactly what they are getting into and are legal adults, age doesn’t really matter.

These days, I’m not so sure about that. But I stay open to women both older and younger than myself. At least, I did before the pandemic. Nowadays I almost never meet women, except for a lady at the all-night pharmacy whom I call “The Milk Cop.” She always gives me the devil if I try to buy more than two bags of milk per visit!

Bleak House carried me through a few nights when I really needed an escape. I just switched it on and away I went, deep into another century where men were men and women were women, with all the good and not so good that accompanied that mindset.

All of the actors are great. And I’m not just saying that. (Remember I’m not getting paid or receiving secret favors for these reviews, so no ‘Phoney McCritic’ here). If I were to pick a favorite actor, however, it would be Anna Maxwell Martin as Esther Summerson, the ever so sweet, humble, and understated lady who rises above her ‘shameful’ origins. Coming in with a close second would be Burn Gorman as William Guppy, the somewhat morbid yet lovable and aspiring ‘gentleman’ who loves but never receives love from Esther Summerson.

There are many other fine performances. Gillian Anderson (X-Files and The Crown) as Lady Dedlock doesn’t say too much but masters that delicate art of lip-quivering which portrays so much emotion in utter silence. And Charles Dance as Mr. Tulkinghorn (a truly nasty lawyer) who also portrays a fierce character in Game of Thrones, just nails the stereotype of the overbearing rich prick.

But again, the cast is pretty much all-good and I can’t recall one weak or unconvincing performance.

So do check it out if you have any interest.

If by chance you don’t get Alexander Street where you live, last I saw Bleak House was also available in low res at DailyMotion, a site a lot like YouTube that hails from France, if I remember right.