What better way to finish up Easter Weekend than to watch The Two Popes?

That’s what I did, although I didn’t plan on it. 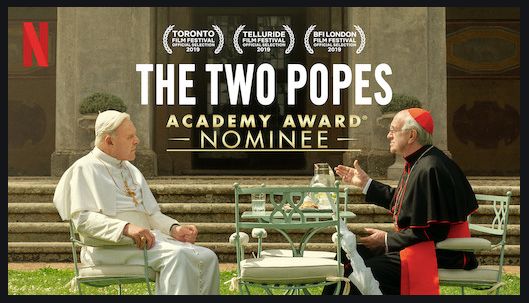 Jonathan Pryce will be familiar to anyone who watched Game of Thrones or Tales from the Loop. He’s a solid actor with a longstanding career who can throw himself into a role like few others can. And Anthony Hopkins, well, he is pretty much a household name. Apparently, Hopkins has some kind of psychological condition which he uses to greater effect in his acting. Power to him. He usually plays creepy characters and let’s face it, he was a good fit with Pope Benedict.

I remember as an ardent Catholic churchgoer during Benedict’s reign how his photo was displayed everywhere, not unlike some despotic ruler whose mug covers every wall in the local airport. And I recall not even being able to look at those photos immediately after receiving the Eucharist at Mass.

To me, Benedict was the personification of pretty much everything that was wrong with the Church at the time.

Enter Pope Francis and many said this new Pope would fix things. And to the uninitiated, it seemed Francis was in the process of doing so.

But I sensed deep down that a Pope is mostly a figurehead for the powers that be within Catholicism. And more to the point, the theological underpinnings and arguably flimsy justifications for some of the Church’s current positions – say, on women – go back like an intricately woven tapestry for almost two thousand years. All the official teachings and texts must conform to one another. So any change to the theological threads now, at this point in time, must “blend” with innumerable, centuries-old threads.

You get the point.

One way theologians, sympathetic writers, and indeed Pope Francis work around this issue is to play very clever word games. They say things that sound good but which really have no effect on the official church teaching.

Many people buy into the soundbyte – “Who am I to judge gays?” – and think change is happening. But it’s not. It just appears to be.

One thing I learned while considering the priesthood is that theologians are not dumb. And I personally felt they would eat me alive, which was part of the reason why I declined to become a priest.

But I’ll be honest here. About halfway through this film, I felt inspired and even got that feeling I’ve felt before – I have to be a priest!

It’s an unusual thing. The Holy Spirit comes over you and you associate that with a calling. The problem is, when your intellect kicks in a bit later, you find a thousand reasons why you will not answer that perceived calling.

And the word perceived is key here. I think many people feel the Holy Spirit and mix that in with their personal biases, desires and inclinations. That’s why, I believe, we often have to feel things out – investigate over time – and not jump to conclusions as to what God really wants from us.

Catholics call this a process of “discernment,” especially when discerning a call to holy orders.

I don’t think people without an interest in theology would like this film. I could be wrong but it seems to operate on a certain level. And those not at – or near – that level might just see two old guys talkin’ trash.

Of course, some might see a bit of both—some interesting spiritual reflections as well as two old guys talkin’ trash!

See this movie if you are familiar with or just curious about Catholicism and Christian theology. I found it quite good and yes, illuminating—even if much of the story is interpretive and not directly linked to actual events.*