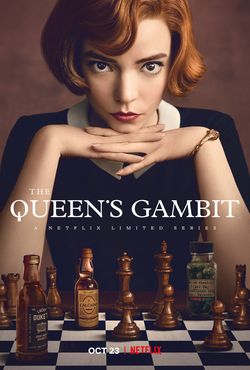 Every now and then fiction moves us more than reality. That’s because fiction, when it works well, reflects general scenes and themes that many folks can laugh and cry over, relate to, and even abreact through.

Abreaction is a psychological term for ‘dealing with stuff’ that’s been buried in the so-called unconscious for too long.

For me, this miniseries did not have that kind of personal effect but it did compel me to remember some friends and acquaintances who found themselves in similar circumstances as the fictional chess whiz, Beth Harmon.

There’s really nothing bad to say about this miniseries. It’s color-coded myth to the max. By that I mean, like most TV shows and movies, everything is meticulously color-coordinated, right down to the knobs and dials on the old 1960s radios.

As I mentioned in my last review about the Romanov’s, if a historical embellishment pulls you in, then power to the artistic directors behind it.

Upon first glance, this series did not appeal to me. The photos of a geeky-looking teen with latent (or budding) sexuality playing chess just did not grab me.

I usually don’t like juvenile ‘coming of age’ films – didn’t even like The Karate Kid too much! – so passed by The Queen’s Gambit the first time around.

This miniseries is different, though. And I’m glad I finally gave it a chance.

Right from the start, we’re pulled into the 1960s world of a smart young girl who faces tragedy and must cope with life in an orphanage run by staff who take delight in doping up children to apparently level them out.

That may sound 1960s-ish but American-based psychiatry arguably is doing the very same thing today. The only difference is that the kids no longer need to be hidden away in an orphanage for that kind of abuse. It’s right out in the open and many parents, teachers and other adults are so totally brainwashed by the APA and Big Pharma that they don’t even see it.

Other pressing issues treated in this film include racism, sexism, elitism, Christian hypocrisy, and alcoholism. And what I like most is that none of these problems are dealt with in a heavy-handed manner. Points of objection are made but the miniseries is much more than a political or ideological rant.

The Queen’s Gambit is actually a very good story with exceptionally fine acting performances and cinematography.

I enjoyed the two younger Beths; Isla Johnston especially stands out but Anya Taylor-Joy as the adult Beth Harmon rocks. As we watch Beth transform from an awkward teen to an international sophisticate it becomes clear that Taylor-Joy’s not just good-looking but can really act. I mean, really act.

Toward the end of the miniseries, Taylor-Joy began to remind me of my Aunt – my father’s sister Nora – who also had those wide-spaced eyes and once confided in me that her IQ was genius level and that she was a Mensa.

We used to play the card game “memory” and she always let me win!

Would that qualify for abreaction? I don’t know. But it was a nice personal touch for a series that travels through time and across oceans in an era when jet-setting was far less common than today.

My very biased and personal rating?

One thought on “The Queen’s Gambit – A quick review”