“The biggest threats are the ‘modernization’ of nuclear weapons and the new ‘revolution’ of weapons,” says Peace Prize winner Jody Williams. 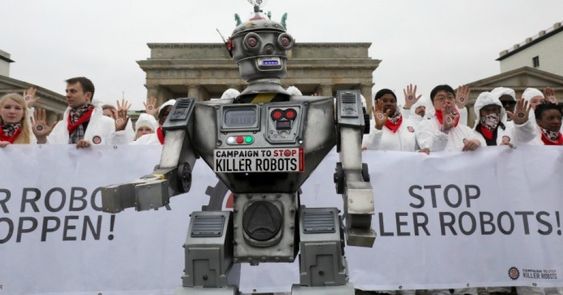 A ‘devastating marriage’ between AI and a robot. What a strange metaphor. Robot, of course, is a Czech word, coined by a Czech playwright’s brother.

The term comes from a Slavic root, robot-, with meanings associated with labor. The word ‘robot’ was first used to denote a fictional humanoid in a 1920 Czech-language play R.U.R. (Rossumovi Univerzální Roboti – Rossum’s Universal Robots) by Karel Čapek, though it was Karel’s brother Josef Čapek who was the word’s true inventor.

I’m not sure when the term “AI” became popular but it was coined by an American computer scientist in 1955.

The term “Artificial Intelligence” was coined by John McCarthy Allen Newell (CMU), Herbert Simon (CMU), John McCarthy (MIT), Marvin Minsky (MIT) and Arthur Samuel (IBM) became the founders and leaders of AI research. They and their students produced programs that the press described as “astonishing”: computers were learning checkers strategies (c. 1954) and by 1959 were reportedly playing better than the average human.

Sometimes I feel like the proverbial ‘system’ is a bit like a computer program. Commands are implemented from on high and everyone underneath pretty much unquestioningly follows them. However, there is room within the system, just like AI, for individual variance.

What do you think? Should machines be able to kill people without any human supervision?

Is society headed in a dystopian direction where hypocrite authoritarians keep the masses in line with high-tech violence?

Or will we come to our senses and use technology to make things better, greener, and more just?