It comes after 500 officers raided the paper and froze HK$18m worth of assets linked to the company. 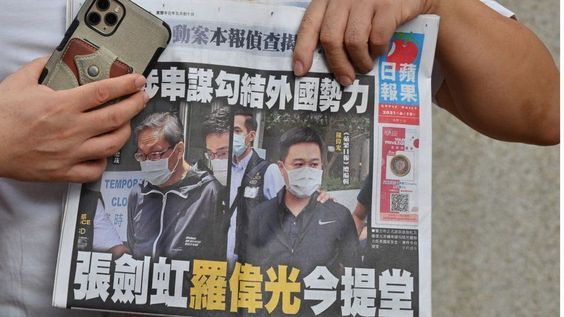 Could you imagine if that were your country? You blog something ‘wrong’ and suddenly you’re under the gun, your assets are frozen, and you wind up in prison.

Thing is, it could be any country. At least, it might be if the people do not actively resist.

Interestingly, I had a professor who came to Canada from a communist-occupied country. His rough, dishonorable and incompetent treatment of me should send out a red flag – communist red, not Canada red – among Canadians in the know.

After effectively trashing my academic career I asked him, “Why?”

His response exhibited the same kind of cold authoritarianism that people in Hong Kong are experiencing today.

I GAVE YOU MY REASONS!

“I gave you my reasons!” he snapped angrily on the phone.

But all he said was that he had changed his mind about writing postdoc scholarship letters  – near the application deadline – and that his letter would be “weak.”

Like any good communist, he changed his mind without even looking at my postdoc proposal. He simply dumped it in my student mailbox with envelope unopened.

Hmm. Was his decision to renege based on merit or something else?

So even though I know nobody gives a damn about me – hey, I’m just an older white male, not part of one of the politically ‘hot’ groups for getting help with injustice and discrimination –  I continue to write about it. Because if we do not resist these crummy authoritarians, we could all be in a Hong Kong scenario before too long.