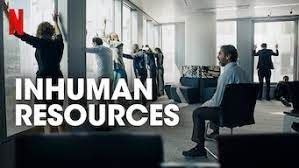 I don’t want to spend a lot of time on this review because, frankly, I felt this series was fair at best.

Worth watching but with some serious problems that made it difficult to take seriously, other than as a character study of a middle-aged guy who is thwarted by the system, totally pissed off, and gets into trouble.

The main and supporting actors are all solid. No issues there. Eric Cantona may not be Gérard Depardieu but his performance as a jailbird telling his tale of how he got there is umm… fairly convincing.

If anything this story will compel you to not break the law and not go to jail! I read about French prisons through Michel Foucault but when you see what can really happen, holy smokes, it tells you in bold to be good!

The main shortcoming of this story is the premise that a company president, Alexandre Dorfmann, would actually enact a hostage-taking scenario without his employees’ consent. As if they would not sue his ass off.

That weakness undermines the credibility of everything that follows. And that’s too bad, because as I say, some of the performances and the overall Parisian ambiance are quite nice.

Final note about the prison scenes. Having never been to jail I cannot say but they seemed to perpetuate unrealistic stereotypes of ugly, almost malformed individuals constituting the prisoner population. Almost like a medieval freak show.

My guess is that the vast majority of modern prisoners are simply people not smart and/or wealthy enough to not get caught. In other words, the poor and desperate turn to gangs and crime and tend to be jailed while most of the ‘respectable’ and perhaps even more violent white-collar criminals lead the life of Riley.

I’m pretty sure statistics would support that notion, in almost any country.

Such is life. As I say, this series underlines that rich or poor, smart of dumb, you do not want to go to jail!😆

Unless you’re some kind of weirdo who needs to be locked up to ‘see the light’ and thus actually wants to get caught.

Don’t laugh. I think some of them out there are actually like that.