We used to think the Big Bang meant the universe began from a singularity. Nearly 100 years later, we’re not so sure. 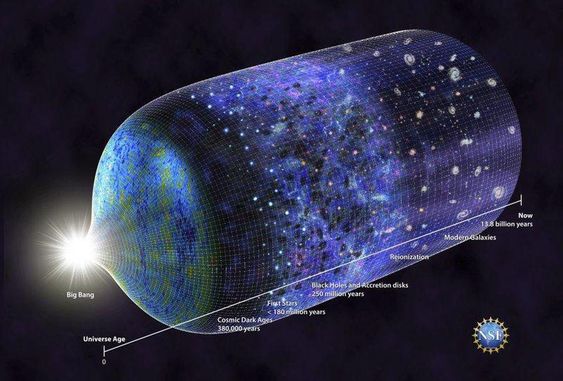 Source: Did the Big Bang begin from a singularity? Not anymore. – Big Think

I’m not surprised. Maybe “Big Think” is really “Little Think.” That’s how I view most cosmologies and the websites and docs that cover popular science.

Don’t get me wrong. It is admirable to try to understand the world around us. I’ve been doing that on my own since I was a kid. However, the common methods upheld by today’s eggheads – that is, those who apparently are the experts – leave much to be desired.

Why do I say this?

Here are three main problems with 21st-century cosmology. These shortcomings have to do with:

3 – A creator and creation beyond the physical universe

But if you are an average lunkhead who does not experience these things, they will not figure into your view of creation. And that is mostly the case today. Or it seems to be.

As for the second shortcoming, the nature of time, the Big Bang theory is couched in the notion of linear time, even though we have some empirical support that time doesn’t really work that way. In reality, our measurable reality, we are each in our own little relative and ever-changing pocket of time. As we move with velocity, time changes. The amount is incredibly small, that’s why our world still syncs. But it is a strongly supported hypothesis that time is not the same for everyone. Or rather, everyone is not in the same time.

If we could take a trip to a kind of spiritual ‘upper balcony’ and look down on our belief in linear time, oh what a sight we would see. We might see sectors of time that we can flip through like pages in a book. We could go to page 55, 200, or 22,000. We could go and have an influence on anywhere God permitted according to God’s eternal plan. And this interactive “book” of time would not be linear but… perhaps something like spherical.

And yes, I suppose that puts us into the third category: A creator and creation beyond the physical universe. Many call that creator God and the non-physical creation heaven but again, if we have not had any kind of personal experience or experiences that demonstrate how God and God’s heavenly realms are not just a bunch of happy chemicals like an endorphin rush (a very crass, reductionistic view) or a hallucination (the medical/psychiatric version of the same), we will tend to view the world in a manner just slightly better than an animal. Actually, maybe worse than an animal.

So it’s time for humanity to get off its high horse and view the world with fresh eyes. Eyes that see not just darkness but everlasting light.

Michael W. Clark has a Ph.D. in Religious Studies from the University of Ottawa, Canada. He has a wide range of interests but realizes that books can only take us halfway at best. Knowledge without experience leads to dry, arid and sometimes childish conclusions.

2 thoughts on “Did the Big Bang begin from a singularity? Not anymore. – Big Think | Opinion”