In several religious traditions, saints and so-called holy persons are said to mediate God‘s graces to other living people and also to souls in the afterlife. This is called intercession, and those mediating God’s graces may, themselves, intercede in this life or in the afterlife. 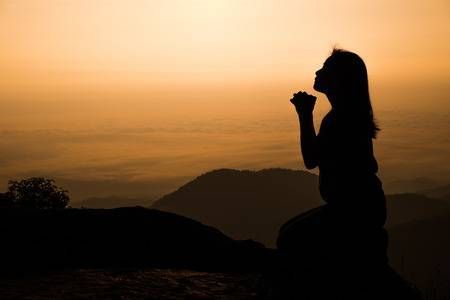 In Catholicism, intercession takes the form of vocal or contemplative prayer, although the latter is often seen as deeper and more effective.

Contemplative prayer is classified as a type of mental prayer. The word mental doesn’t mean “nuts” or “flaky,” as in everyday English usage. Instead, it signifies a quiet inward prayer that benefits the self and others.

This type of contemplation benefits the self because the person praying relates with God in a profoundly personal, intimate, and heartfelt manner. And it helps others because purifying graces from God mystically pass through the prayerful mediator to others in need of divine assistance.

According to this belief, the unifying factor among intercessors and the recipients of grace is that which Catholics call the Mystical Body of Christ.

Contemplative intercessors are usually believed to be more spiritually aware and pure than intercessees. To borrow from Plato‘s cave analogy, the dynamic could be viewed as follows: One digs their way out of a deep, dark cave and shines a light down from above to try to help those still lost and struggling in the underground depths.

As with this analogy, many lost in the underworld don’t know they are lost. So a recipient of graces via prayers of intercession may be totally unaware that another person intercedes for them. Moreover, if the intercessor is still living in this world and the person being assisted has a dark or unsettled soul, the latter may actually despise and even become aggressive or abusive toward the former.¹

This dynamic arguably involves a complex interplay of higher and lower personality traits, spiritual influences and powers that have been activated throughout history and prehistory.

To sum, intercession is a mostly theological term largely overlooked by Western medicine and psychiatry. I think this is unfortunate because many totally buy into the skewed and reductionist worldview of medicine and psychiatry and in doing so, might never really get better or fully flower into what they could become.

The solution, however, isn’t easy. When an entire society is literally brainwashed by scientism, a kind of total reimagining and rebuilding is required to right current wrongs. And frankly, I don’t see this transformation happening overnight, despite what some New Agers say about a “tipping point” or “paradigm shift.” No, we have to go step by step to make things better. And this article hopefully contributes to at least one of those steps.

¹ In some instances it’s conceivable that the abuse may become systemic, where a potential saint is psychologically and physically harmed by any paradigmatic practice which has little or no appreciation for the subtle – but no less essential – dynamics of the spiritual life.

† For those new to the history of ideas, the term vulgar materialism generally refers to the belief that everything, including mind, can be reduced to matter. It has its modern roots in France, Germany and Russia but goes way back to antiquity. Even India has an ancient school of materialism called Carvaka.

Michael W. Clark has a Ph.D. in Religious Studies from the University of Ottawa, Canada. He has a wide range of interests but spirituality is probably his strongest suit. Given a choice, he would have rather been a pop music star! 😁