Hey guys, if you ever wanted to go to Rome but weren’t able to make it, this chapter’s for you! A bit of a longer segment this time. Louis and Stella are just sorting things about after jumping to Italy.🙂

“How the hell did we get here?” she anxiously snapped.

We just made it, Louis thought. He motioned to a nearby fountain and they walked over some terra cotta tiles to sit down. Louis was still charmed by the warmth of her embrace, even if it was mostly in the vortex.

“Relax, okay?” He turned to Stella. “I trusted your dream. Now you need to trust me. I’m a time traveller.”

“A time traveller…” she repeated incredulously.

“No big deal!” she exclaimed as she surveyed the antiquated environment with eyes wide open.

“Right. We just travelled.. through time..” (almost yelling the last two words) “from that washroom cubicle to wherever the hell we are now! And IT’S NO BIG DEAL!”

“We’re in the 21st century,” Louis said dryly. Then with finality, “Rome.”

Stella paused for a second. “Okay, assuming I believe you and you haven’t just drugged me like some weirdo predator, how did you do it? Where’s the machine, Dr. Wells?” she asked, regaining her sense of humour.

“Oh, did you read that one too?” he said with a smile.

“Whatever. Mister… Doctor… So where is it?”

“Where’s what?” Louis scanned the area, trying to figure out the best way to make it without local currency. The place looked so old and dirty, he could hardly believe it.

Stella flinched at his outburst but said nothing.

“Okay,” Louis continued in a softer tone, hoping his unintended insult would blow over. “Let’s figure out how we’re going to eat in this place.” It wasn’t like Louis to speak harshly and he was surprised at himself.

Louis thought it over and decided to fix things.

“Look, I’m sorry, I don’t know where that came from,” he faltered. “But you certainly don’t deserve that kind of… treatment.”

Stella said nothing as she put her hand in the pool and watched the ripples mingle with the shifting surface as she wiggled her fingers.

“My father used to say that to me,” she said.

“I don’t want to repeat it,” she replied without emotion, “What you just said.”

“Quiet!” She clasped her hand over his mouth. Her palm’s warmth radiated into Louis’ lips.

“I’m sorry,” he mumbled under her skin.

“Just don’t let it happen again. And don’t bother psychoanalysing me. My father could be a creep. No big deal, as you would say.”

He felt a strange bond between them. But not strange. Pleasant. He seized the moment and placed his hand on top of hers, still across his lips.

“I’m sorry,” he said with genuine feeling. “Look. I know you didn’t want to get mixed up in my enigmatic life. You’re a decent person and from what I can see, you deserve…”

“I deserve what?” she asked peevishly.

“Forget about that,” Stella interjected. “We have to figure out what to do now. Are we stuck or can we get back to the museum the same way you got us here?” 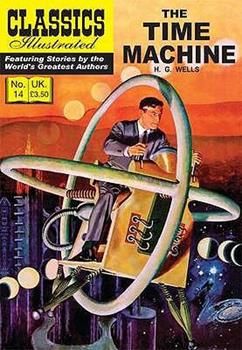 Just then a young tourist with wavy hair and a scruffy beard appeared, walking steadily towards them. He carried a backpack with an old-style American flag stitched on the back flap. Louis recognized it from his study of American history. The youth looked affable enough.

“Maybe this young fellow can help us,” Louis said. “He looks better equipped for survival than us.”

The traveller drew near.

“Funky hair!” he replied with a smile. “Where you guys from? England?” Louis and Stella’s attire and hairstyles were not exceptional for the 23rd century but quite out of the ordinary for the early 21st.

“A place you’ll never see!” Louis interrupted. They couldn’t say they were from Canada. It was far too similar to the USA in the early 21st.

“Okay.” The youth smiled. “You guys smokin’ something?”

“You mean.. cigarelles?” Stella thought she had the right word.

“Definitely smokin’ something,” the youth said. “You must be from Canada. I hear you wanna legalize weed!

They all laughed although Lous and Stella didn’t fully understand the joke.

“‘Don’t mind that. But forget the socialism!” the traveller added.

“Listen my good man,” Louis began, calling up memories of what he believed was early 21st-century American dialect. “Would you be so kind as to demonstrate the manner in which we might survive these distant shores?” Space travel was still in its infancy and the planet seemed a much bigger place back then, Louis figured.

“You mean ah, you wanna place to stay?”

The traveller thought Louis and Stella were a pretty weird couple, but he liked them. He sensed their peaceful gentility and liked non-violent weird.

“Hi Larry,” Stella said, not divulging their own names.

These two are really out of it, Larry thought. He was referring to the popular guidebook, Lonely Planet, worth its weight in gold for most budget travellers. Little did he know that the book would soon become a mere shell of itself with the rapid rise of wifi access.

“No,” Louis said. “I’m afraid we do not have that publication in our possession. And as you can surmise, we are, at the moment, somewhat disadvantaged. Could you kindly offer us assistance?”

“Man, you sound like you’ve been reading too much philosophy or something,” the traveller smiled. “What’s your trip?”

“Our trip?” Louis pondered the colloquialism.

“We’re from the 23rd century, you dig?” Stella threw in. At this point, she didn’t care to be careful, missing the mark in another direction with her 1960s and 70s lingo.

Louis blurted, “No, we’re not really–”

“So it’s Captains Kirk and Janeway!” The traveller didn’t imagine for a second that they were actually telling the truth.

“So where’s the spaceship? Or hold on… The time machine.” His smile broadened, revealing a set of slightly yellow, crooked teeth. Louis was taken aback by the non-corrected jaw. 23rd-century teeth were always perfect. But it wasn’t Larry’s smile that worried him.

“Where’s your time machine?” Larry repeated. Things were getting a little too close for comfort. Louis didn’t want to blow their cover, so he kept up the humour.

“We hid it in the Vatican.”

“Ya, I wanna see the place where all those people were burned at the stake.”

“Ya, but I saw on TV that some Pope ordered a bunch of heretics to burn at the stake. They were even going to fry Galileo. But he kissed ass to save his skin. He wimped out.”

“He didn’t wimp out,” Louis said, understanding what that meant. “He was just smart. People were barbaric back then… But aren’t much better today,” he added.

“Anyhow, I’m going to the Vatican, so tell me what it looks like so I can get a peek,” the traveller said.

“Your time machine,” he grinned, noticing for the first time her strange beauty. “You hid it there, right?”

Louis had had enough fun and games. “Listen my good man, we really must find a place to stay. But for reasons I won’t delve into, we do not have a red cent in our possession.” Louis still didn’t know that he was way off trying to emulate the traveller’s dialect.

“Pickpocket hit you up?” Larry asked.

“Could you help us?” Louis implored, becoming a little exasperated.

“Well, not with the money. But if you really need a place to stay, go to the north edge of town. There’s some Deadheads near the Marcigliana Nature Reserve with lots of tents and stuff. They’ll put ya up.”

“Man. Where have you been for the last few hundred years?” Larry said, not realizing the irony. “The Dead? You don’t know The Dead?”

Music. The word propitiously popped into Louis’s head. And then, Rock and Roll…

“Oh. Aren’t they some kind of… Rock and Roll outfit?”

“Hey. So the man actually knows what Rock and Roll is!” Larry joked. “Well, they changed a bit over the years. I’m not really a Deadhead myself, but I do know they’ll keep ya both warm and dry. It’s amazing they still get together with Garcia really dead!”

One thought on “The Chronicles of Louis Brandon, Time Traveler – Chapter 7 – Part 2”