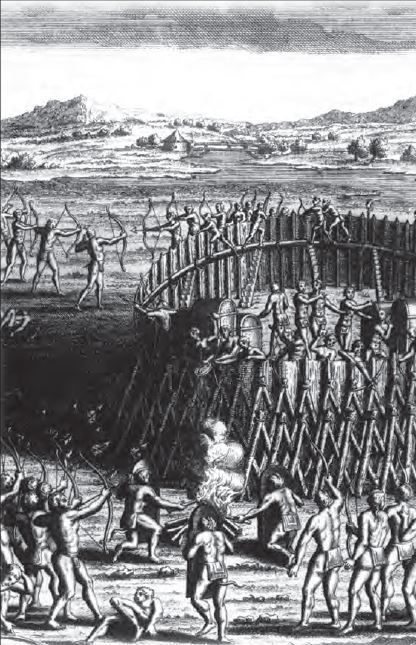 The history of indigenous military activity, prior to the arrival of Europeans.

Some aspects of indigenous warfare shocked the European settlers. For example, the custom of scalping the enemy, which consisted in removing his hair by cutting off his scalp, scandalized many European observers…

Torturing prisoners was not uncommon among some indigenous cultures…

The prisoner was usually tied to a post and his fingernails were pulled out and various parts of his body were burned, often with a brand or red-hot metal tools. The idea was to prolong the agony for as long as possible so the captive could prove his courage and endurance.

I wonder how long before this telling piece is removed as history becomes whitewashed to please fantasy thinkers in favor of those who want to know what really happened in our collective human past.

It is about time we all realize that brutality is not something unique to European colonizers. Most cultures throughout history fought among their neighbors, often with frightening ferocity and human indecency.

In Canada, PM Trudeau recently had talks with Indigenous leaders about how to raise and lower the Canadian flag this year so that hopefully nobody in the country will be offended.

One thing to remember: If the historically established nations of Canada and the US did not exist and fight against Hitler, that crazed embodiment of evil most likely would have ravaged North America and I suspect been even crueler – and more efficiently so – than what we already find intolerable.

Something to think about as we approach Remembrance Day.