Do you ever meet someone in public who makes a striking impression on you? It happens to me fairly often. And admittedly, it often is a woman. But not always, come to think of it.

Yesterday I needed some windshield washer fluid as the temps are dropping and the orange warning light was flashing in our wheels. I could pay up to $18 at the rip-off gas station or go to Canadian Tire (an established hardware superstore) and get it for $3.29.

Buying outdoors might have been safer, so I hesitated to go to the indoor Canadian Tire. My intellect said, “Don’t go inside with Omicron raging.” But my spirit said, “Go to Canadian Tire, you need that drive and an outing.” It was a lovely sunny day yesterday, after all.

I ended up going to the indoor hardware store, following my spirit instead of my thinking. Also, it was Monday and shouldn’t be too crowded, right?

The lineup to check out was amazing and I almost left. Perhaps folks are panic buying suspecting that stores might be utterly closed once again. I’m not sure. But as I say, I almost left but that same spirit told me to stick it out and stay in line, so I did although not entirely comfortable with the situation.

Anyhow, this very attractive lady and mother steps in the line ahead of me with her young child. I say nothing. She probably thought I wasn’t in line because I was keeping more than a six-foot social distance from the persons ahead of me.

She realizes her impropriety and apologizes, moving behind me.

We speak just a little but the words exchanged and especially what she said had a lasting effect on me.

Later in the day, I kept thinking about her and what she said.

That night I couldn’t sleep so got out of bed and came downstairs, still thinking about my brief encounter with, I jokingly said to myself, “Lady Chatterley.” (She was upper class if not quite aristocratic British, by the sound of her accent and appearance.)

Where did that come from? I wondered.

Literature is not my strong suit. I sort of know my way around but there remain many ‘classic’ novels that I haven’t read. Lady Chatterley’s Lover is one of them.

So who wrote that, after all? I got to thinking.

A quick search brought up D. H. Lawrence and the novel for free on our iPad.

What an interesting author and novel!

I have only read Chapter One but already can see I am going to like this.

With his curious mix of ‘class,’ ‘culture’ and ‘straightforwardness,’ I think I might have found a kindred spirit in D. H. Lawrence.

The book itself was banned as some kind of apparent ‘obscenity’ but today, after all the bans have been lifted (in reasonable countries, that is), it really comes off quite tame. More insightful than “racy” or “rude.” 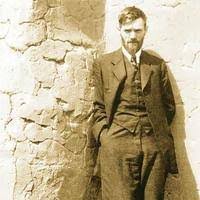 From just Chapter One I can see that Lawrence is able to put himself in the shoes of so many different types of people. He really is an interesting soul. And I look forward to finding out more about him and Lady Chatterley!

Ours is essentially a tragic age, so we refuse to take it tragically. The cataclysm has happened, we are among the ruins, we start to build up new little habitats, to have new little hopes. It is rather hard work: there is now no smooth road into the future: but we go round, or scramble over the obstacles. We’ve got to live, no matter how many skies have fallen. *

One thought on “One thing leads to another… Fact and fiction”