It’s a long weekend in Canada, where we still celebrate Queen Victoria’s birthday, although I imagine many Canadians wouldn’t have a clue, and if they did, they would be petitioning to cancel or rename it due to the reframing of colonialism. Still, the celebratory fireworks can be heard out the window at night, as it has been for many years.

Traditionally, this was the first weekend my family would take to the great outdoors to open up our ancestral summer cottage at Georgian Bay, enjoying nature and getting away from it all. I have fond memories of cold sheets of Georgian Bay water splashing against my brother and me as we sat on the gunwales of our modest but very sea-worthy Hunt (that’s a particular type of boat with a V-hull, which back in the day was a big deal). We might have been clutching a sailboat straddled across the back or maybe making sure a hefty propane tank didn’t slide from its wedge.

These were the early, almost primitive days of cottaging where the rustic homestead on our island was powered by gas, candles, and batteries. Electric power had yet to arrive, we had no telephone or TV… it was truly magical. A place where a young boy like myself could easily travel in thought and spirit.

Many of my family and old friends still frequent the area but I’m happy with the memories indelibly stamped in my soul. 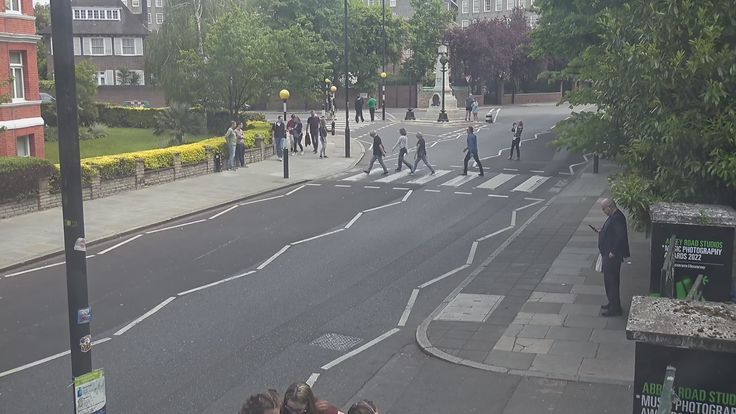 Speaking of which, it was up there that I first really ‘heard’ the Beatles’ Abbey Road album thru my battery-powered tape recorder.

Today, sitting in the city, I happened across this Abbey Road Cam and found it amusing how some 50-plus years later, people are still stopping in the middle of the crosswalk to imitate the Fab Four’s famous steps. These pedestrians in the screengrab stopped halfway to set up their strut just before I captured this. And I imagine if you follow the link you’ll see more doing the same before long.

The thing about the Abbey Road record most younger people will not be aware of is that the two sides of the original vinyl release were as different as night and day. It was the second side of Abbey Road that many claimed was an insurmountable work of art.

So I suggest listening to the whole thing, for sure, but also try beginning at “Here Comes the Sun” and follow through to the last tune. I think you’ll find that ‘the second side’ still blows away a lot of the newer stuff out there!