Having directed two undisputed masterpieces – Citizen Kane and The Magnificent Ambersons – Orson Welles delved into the suspense film, crafting a baroque postwar thriller… Edward G. Robinson stars as Wilson, a government agent who tracks down a high-ranking Nazi officer (Welles) who has managed to craft a new identity for himself in a quaint Connecticut town, marrying the daughter (Loretta Young) of a local judge.

Have you ever met someone from another country and wondered if they really are who they say they are?

With so much crime and international intrigue these days, chances are you have at least brushed up against someone who has constructed if not a fake identity at least a phony backstory about why they emigrated and what they’re up to. 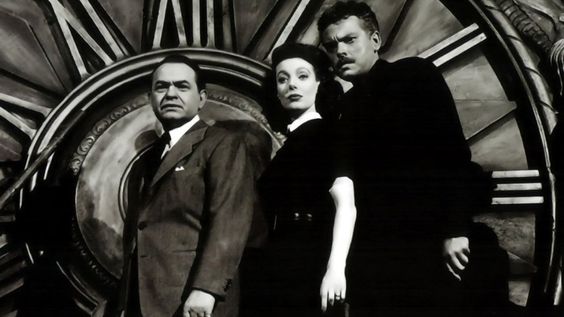 In this classic film noir, we find a postwar Nazi war criminal who marries a sweet, innocent young American woman to beef up his cover as an American professor. The professor was a kingpin for the Nazis but for the rest of us watching today, he could represent any criminal and/or spy sent out to ultimately deceive and violate our innermost sentiments and sacred ideals.

What’s most surprising about this film is its innovative psychological portrayal of the wife, Mary (Loretta Young). Shattered when hearing the truth, at first she goes into denial. How could the man she gave herself to be a horrible, violent criminal? The others who say so must be wrong, she muses in deep conflict. They’re all out conspiring to get my ‘respectable’ husband, the professor—yes, the accusers are the bad ones, not the psychopathic Nazi war criminal whom I innocently married.

So for a while, Mary helps to protect her husband until it dawns on her that he is out to get her too.

I liked this film. It not only gives us a lovely window into small-town America back in the 1940s but is also loaded with megastars and some effective camerawork. If the dark shadows, shaky hands, and furtive glances seem a bit overdone here and there, remember this is the 40s and most everything was less subtle back then, cinematically speaking.

But again, it’s the unfolding psychodrama that makes this film shine. Loretta Young gives a charming performance no doubt helping to fuel a remarkable career that would continue for several more decades. Edward G. Robinson – a complex actor who reminds me of a 1940s Tony Soprano – also dishes out a riveting performance as the United Nations agent trying to track down the Nazi professor.

The Stranger was co-written and directed by Orson Welles, who also plays the duplicitous professor. Overall, I enjoyed Welles’ performance but felt he overdid it a bit every now and then.

You can catch the film for free at YouTube. I watched the Kanopy version, which seems a bit sharper.