Jean-Baptiste Pierre Antoine de Monet, chevalier de Lamarck (1744-1829) was a French naturalist and deist who served in the French army, studied medicine and botany, and in 1773 published a pioneering work on French Flora.

Lamarck’s work prefigured Charles Darwin’s theory of evolution but with one crucial difference. Lamarck believed that organs develop or degenerate over generations according to their use or disuse.

The belief that the change of an organ’s size – from use or disuse – is genetically passed on to offspring did not receive empirical support. Lamarckian theory was soon replaced by Darwinism and poor Lamark was destined to be ridiculed from that day onward. 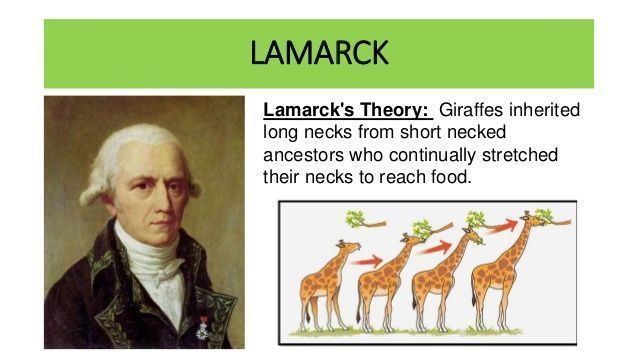 However, recent studies suggest that so-called epigenetic changes do arise in species.

Epigenetic changes have also been observed to occur in response to environmental exposure—for example, mice given some dietary supplements have epigenetic changes affecting expression of the agouti gene, which affects their fur color, weight, and propensity to develop cancer.†

And sometimes these changes are transgenerational:

Marcus Pembrey and colleagues also observed in the Överkalix study that the paternal (but not maternal) grandsons of Swedish boys who were exposed during preadolescence to famine in the 19th century were less likely to die of cardiovascular disease; if food was plentiful then diabetes mortality in the grandchildren increased, suggesting that this was a transgenerational epigenetic inheritance. The opposite effect was observed for females—the paternal (but not maternal) granddaughters of women who experienced famine while in the womb (and their eggs were being formed) lived shorter lives on average.¹

Essentially, epigenetic changes suggest that in some cases the effect of environmental factors – not just genetic – on a given organism may be transmitted to offspring.²

So Lamarck’s approach deserves more respect than commonly awarded. One might even say he was in the ballpark.

While DNA itself is not directly altered by the environment and behavior except through selection, the relationship of the genotype to the phenotype can be altered, even across generations, by experience within the lifetime of an individual. This has led to calls for biology to reconsider Lamarckian processes in evolution in light of modern advances in molecular biology.³

The funny thing about science is it always changes. So what we learn as “certainty” in school is often replaced by something else, further down the line.

¹ http://en.wikipedia.org/wiki/Epigenetics (2010/12/03 entry). The current link contains a lot more detail than the 2010 entry. Why? Because the idea has gained more credibility, exposure and support among scientists in various fields. As I often say, science is not about objective truth but rather an evolving human enterprise.